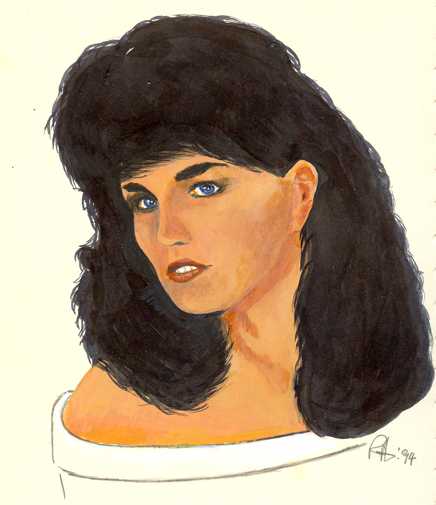 Far from the heart of the Rococon Empire, and at the edge of the southern sea, there lies a scattering of tropical islands, where the ships of traders pause to take on water and the intrigues of diplomacy lurk under an idyllic cloak On one these islands can be found the Wyverns’ Roost – a Tavern, a trading place, and the office of the islands Rococon Governor. He doesn’t do much governing – but he does run an excellent tavern -and employs an unusual bard …

Sapphire plucked a sequence of notes from the instrument in her lap, the sound sweet and clear over the surrounding hubbub of conversation.  “Leo pays me to work here, Cormoran, not study your scribblings.  I’d better earn my keep.”

The mage smiled.  “You always earn your keep, Sapphire.  ‘Least, I always think so.”

“You aren’t the one who pays me,” she pointed out, dimpling a little at the implied compliment.  “How about ‘The Lord Larrin‘?”

She plucked another phrase from the strings, then elaborated on it with agile fingers.  Several people looked up as the familiar tune wove its way through the room; when she was sure of an audience, Sapphire began to sing.

Hear the horns blow sweet and low,
Hear the hounds give tongue below
Pounding hooves beneath the sun
Lord Larrin he is hunting.

Her voice was sweet , although not overpowering.  It lacked a little polish, but made up for it in clarity.  The song was an old favourite, known through all the settled world, and it made a comfortable backdrop to the murmur of business and pleasure that ebbed and flowed around the room.  Her fingers rippled over the strings, weaving the counterpoint to the melody with competance if not practised skill.  There was no power in her voice to do more than lift the spirit a little, but it did that with warm certainty.

Though many a league he’ll ride this day,
Through forest deep and fields of hay
He won’t turn back, nor turn away
Lord Larrin he is hunting

Left his bride upon the hill,
Left her though he loved her still
Went to hunt the silver deer
That filled his heart with longing.

It was a cautionary tale, but it had a lilting tune and a lively rhythm.  Heads nodded in approval, and even the sour faced Gogothran let the small curve of a smile creep onto his face.  Ashard leant against the bar to listen, and nobody seemed to complain that service was suddenly slow.

Drove the hounds before his steed,
Swore he would complete the deed
Will not rest, will not give way
Lord Larrin he is hunting.

Hearts afire and the chase a foot,
Hounds on the scent and the quarry hooked….
The chase leads on, his love forsaken,
He cannot turn back until the stag is taken

Cormoran’s hands moved idly, a distracted gesture at best; light flared between them and he jumped, hurriedly extinguishing the flame he had summoned and looking a little guilty as he did so.  Sapphire had not noticed, caught up in the concentration of the song.

Horns may be heard in the dying day,
Still the hunt goes on they say
Still the pursuit, still the chase
Lord Larrin he is hunting.

Out of the darkness, under the sun,
The stag and the hounds and the hunt goes on
The days may turn and the night pass by,
Lord Larrin still hunts and he hunts the sky

The sound of his horns are a warning cry,
Wise fools turn when the hunt goes by
Weeps the bride upon the hill,
Weeps for her love who’s hunting still

She repeated the final verse with relish, drawing out the last line into a breathy declamation.  It was followed by an enthusisatic round of applause, several whistles and a flurry of orders as customers suddenly realised that their mugs were empty …