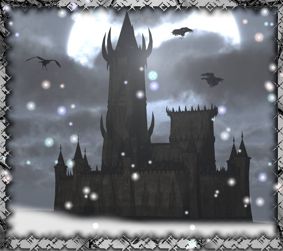 Last week I used up the last of an old batch of incense, made several years ago. ‘Castle Winter’ was originally created as part of a range of incenses made for sale at a Robin of Sherwood convention, and was therefore somewhat more domestic and less magical in its concoction than most of my recipes tend to be. The aim was to create an evocative scent, rather than support a specific intent, although it, like the others, was created with appropriate associations in mind.

There were two ‘Nottingham Castle’ formulations – one for Summer and, this one, for Winter. There are two possible approaches I like to take when formulating a winter incense, and both can be used for creating incenses used at and around Yule. One is to aim for a recreation of the bright wildness of the winter season, using ingredients like pine, and holly (and even mistletoe in small amounts). The other is to reflect the richness of Yule celebrations and the warmth of the hearth and home.

Castle Winter takes the domestic approach, creating a scent that speaks of spice and hearth fires, of home cooking, and the protection of strong stone walls against the perils of storm and frost and winter chill. It’s an everyday version of a much richer Yule scent, and can be used in at any time in the deep winter months, from late November through to early February.

I had managed to keep a record of the original recipe (something I didn’t always do in the early days – I have some fascinating unlabeled jars filled with equally fascinating scents, the intended purpose of which are now long forgotten.) It looked simple enough to recreate, and this morning I did just that – except, of course, I had to substitute one ingredient, because, while I probably do have some St John’s Wort lurking somewhere on my shelves, it really didn’t want to be found today! I also decided to enrich the scent by adding some essential oils – something that wasn’t in the original recipe, probably because we were making large batches for sale, and needed to do so on a budget.

So – the base mix is spices and herbs rather than woods and resins: originally cinnamon, cloves, nutmeg, St John’s Wort and rosemary, with added dried orange peel, and some ground grains of paradise.

As many of the ingredients were fine powders, I used whole cloves, pounded to a crumble in a pestle, and shredded the orange peel, rather than grated it, to give some body to the mix. Fresh rosemary could be added to give further textures, although in this case I used dried which was fairly finely crushed.

As I couldn’t find my St John’s Wort, I used peppermint as a substitute (both have a Fire association, and reflect the ‘domestic’ intentions of the mix) and added some ground black pepper in with the grains of paradise (for similar reasons.) I then added matching oils to deepen the overall scent – cassia, cinnamon, black pepper, rosemary, and orange.

The result is a dark, rich, powdery mix, with a spiced scent that swirls with hints of shuttered nights, flickering fires and the glow of candle light. I’ve left it to mature for a few days, and will use it for dark mornings and darker evenings as the mood takes me.

My Yule incense, uses more expensive ingredients (like Frankincense and wine …) but the basic approach is the same, so Castle Winter could be used for the festival at a pinch – but it’s really meant for domestic days, when work needs to be done, and the chill of the Winter needs to be combated with good cheer and the welcome warmth of busy kitchens and cosy fires.

Like all loose incense it needs a source of heat to burn, and it works well when smoldered on a charcoal disk.  Because there are no resins in it, it will be consumed fairly quickly, so it’s best applied in small amounts, adding a bit at a time to create and maintain the scented smoke.

And a sprinkle added over a wood fire will enhance the warmth of a cosy room, and evoke the Yule spirit as the year counts down to the shortest day.